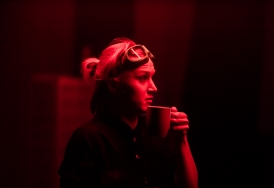 A city by the sea. Those who washed on the shore, became the residents. Those who are at the sea, sail towards the city. The constant flow of people and water raises the winds that penetrate the hearts and heads. Feelings and thoughts are blown out to the streets. This performance is about a city by the river. A city that is divided by Dangė river - a path that was laid down from the sky. Klaipėda is divided into new and old parts, the part of work givers and the part of workers, the part of those who fight and the part of those who were given the victory. This performance is also about the city by the port, rumbling railway and squeegeeing construction cranes. About the city without historical significance and a city with one of the most compelling stories about urban life in Lithuania. About jazz, theatre, beauty salons, construction work, secrets, challenges, memories, strange people, dancing plastic bags and historical multiculturality. About empty streets and city descriptions, that do not include people.

It's about people too. The living and those who lived. Who washed up here at random or chose to be here. About those, who look exceptionally local and those, who came for a visit and never left. Performance of real stories from real people with a spice of fantasy, mysticism and dreams.

“Lights along the sea” is the third documentary theatre performance by Jonas Tertelis – a cinema and theatre director (other: „Žalia pievelė“ and „Nežinoma žemė. Šalčia“). In his work, the director tells his subjective story about the emotional, often sensitive history of the community, about the experiences of a simple man.

Health Notice: strobe lights are used during the performance, thus it is not recommended for people with epilepsy.