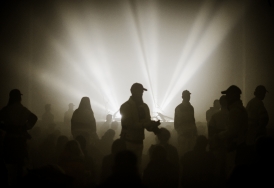 For one night the place will become a mystical temple of today. Leave the rushing routines and dive into the timeless space. The mysterious fog will bring you to a modern ritual, where you can wander, discover, trust, ask and answer. Observe or get involved. Maybe there you will meet a beast. Or maybe the one is you? The performative event is the latest collaboration between two Lithuanian emerging artists, Paulius Markevičius and Barbora Šulniūtė.

The performance was created on the basis of documentary inspirations during the trips made around Lithuania, whilst analysing the beast, its environment and the natural need of the ritual. The creators have visited Lithuanian settlements that have experienced the greatest demographic changes within the last 10 years in the country as well as the National parks. They analysed what sort of "beasts" live in those areas. For creators it was important to find “the beasts” who live there, how their adaptation features change and whose habitats or the entire species is vanishing. This event is a space between the performance and the installation, when the boundary between the observer and the participant assimilates and disappears, fusing together in the common space of time, as if breaking the usual laws of physics. There is no linear flow of time in the work process. It is a ritual-like sense of being focused on purpose, action, state, and everything else around, like being in the centre of a whirlwind, full of peace, but around - the earth mixes with heaven, objects, things, plants, humans, animals. ... The work is intended to draw attention to the natural need of the ritual. Of course, in its specifics the space can provoke quite different feelings, different rituals, for every observer and participant. So we will be happy if such an individual approach and experience will be revealed at this event. What do we call the beast? Is a human a beast? In any case, the human is led by feeling, hunger, desire, crave, thirst - the beast.

Paulius Markevičius (born 1989) is one of the most active young generation’s talents in the theatre and performance field. Since 2010 Paulius has carried the ball in many different theater and film productions. He has created for National theatres as well as been nominated and awarded with the Golden Cross stage award. His work in the independent field has been recognized with the Young artist prize in collaboration with the Arts and Science Laboratory (2018).