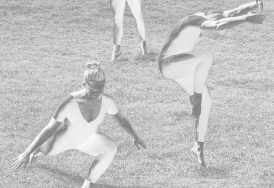 In 2019  world has  celebrated the 100th anniversary of the birth of one of the most influential choreographers, who revolutionized the understanding of dance and movement: Merce Cunningham. On that occasion, two leading  German  dance  institutions  –  Tanzplattform  Rhein-Main  and  Künstlerhaus  Mousonturm  –  The Museum Angewandte Kunst and the choreographer Paula Rosolen joined  forces to create a piece honouring the dance legend. She opted to work with up to 100 professional dancers and choreographers and amateurs from different  generations  from the Rhine-Main region, each of whom would develop 2-minute solos and movement sequences inspired by Cunningham’s principles of movement, and who wish to pay tribute to the great avant-garde choreographer. Then, Rosolen  assembled these sequences into a large group score, which was performed open-air with live music.

For the opening of the 15th edition of the International Arts Festival "Plartforma", Paula Rosolen  is recreating "Homage  to  Merce  Cunningham"  with  20  Lithuanian  dancers  and  choreographers.  The  creation  process begins  with  a  creative  workshop,  in  which  the  individual  sequences  will  consolidate  into  a  large-group choreography with music composition and a live performance by musician Emilian Gatsov -Elbi.

Paula Rosolen  studied dance at Frankfurt University of Music and Performing Arts and completed a master’s degree in choreography at Justus Liebig University in Giessen. In her choreographic pieces, she works along the boundaries between dance, performance, music, and theater. She aims to make visible the dance that is inherent to popular culture and mundane activities. These subjects are always studied from a distinct point of view and are usually set in a foreign context. In “Aerobics!  –  A Ballet in 3 Acts” (2015), for  example, she dealt with a form of fitness training developed originally for the U. S. Air Force. She was invited to show this piece at the 2016 German Dance Platform and was awarded 1st prize at the international competition “Danse Élargie”, organized by  the Théâtre de la Ville in Paris and the Musée de la danse in Rennes. In “Puppets” (2016)  and  “PUNK‽”  (2018)  she  continues  to  set  her  focus  on  peripheral  topics  in  dance  –  researching movements of puppeteers or setting out in search of traces of Punk Rock.  Her last production is “FLAGS” in co-production  with  HELLERAU  –  European  Centre  for  the  Arts  and Künstlerhaus  Mousonturm  and  was presented during the 14th edition of “Plartforma” Festival in 2020.

Paula Rosolen has had residencies at the K3 – Center for Choreography in Hamburg, Workspace Brussels, the Hessian State Ballet, the Goethe-Institute’s Villa Kamogawa in Kyoto, and was a visiting fellow at the Saison Foundation in Tokyo.