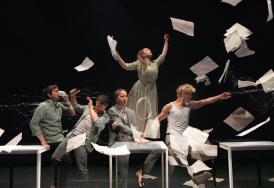 PERTO is the Portuguese word for “near”, “close”. It is the conceptual starting point for a transdisciplinary performance which experiments with the potentials of real time video imagery on scenic spaces. Transforming the meanings of the actions on stage by the simple manipulation of images in an imaginary space, “Perto” explores technologically mediated relationships and how different modes of communication can intertwine, interact or speak to each other. Combining contemporary circus, video art, dance and physical theatre, blurring boundaries between “virtual” and “real”, PERTO creates a complex network of interactions between different universes and the performers themselves. Through a collection of several tableaux, or short stories, 5 performers share the stage exploring different aspects of our lives and roles in a technologically mediated society.

Portmanteau is a contemporary circus company from Finland, focused on creating multidisciplinary performances exploring the dialogue between circus and other art forms. In a constant search for new and poetic aesthetics within the performing arts, “Portmanteau” is a collaboration between the circus/visual artist Luis Sartori do Vale and the dancer/circus artist Mira Ravald. With its first production, the multidisciplinary performance Portmanteau, the company has received the Sirkuksen Lumo Award 2018, as an acknowledgement of the work done to promote Finnish circus arts. It has been touring internationally since 2018, warmly received by both audience and critics alike.  https://portmanteau.fi

Luis Sartori do Vale is a performing artist, director and visual artist. After a diploma in Visual Arts, he graduated from ESAC (Belgium) as a circus artist. Besides his own projects, he has collaborated with several directors and companies, such as Kallo Collective, Petri Dish, Archaos, Les 7 Doigts de la Main and Hurjaruuth. In 2012 he co-founded the company Nuua, becoming a laureate of Circus Next and also awarded the Special Prize of the Jury in the 35th Festival Mondial du Cirque de Demain. Besides performing, Luis develops works with visual arts, between illustration, video, photography and installations. www.luis-luis.com

Mira Rivald is a performing artist working within contemporary circus, dance and physical theatre. She has graduated as a circus artist from Salpaus Further Education in Lahti, Finland, specializing in tight wire. With her solo works Mira is interested in exploring the borderline of dance and circus through movement based practices, musicality and poetic motion in search of new and fusion-like perspectives. As a first-time filmmaker, she has written and produced the short film OMI (2020), which has gained international acknowledgement for its experimental kind. www.miraravald.com