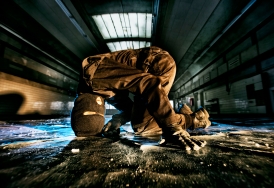 *Corner of the critics

“A milestone in the crisis art of recent years” – Kristian Husted, Politiken, April 2015.

POST NO BILLS is an exploration of the transformative power of crisis. An ‘arte povera’ performance edging its way into the space where composure is irrevocably lost and the new and unknown barely glimpsed: When the stomach-ache following the collective Western consumer-constipation has receded. When times have become tough. When ships have been wrecked and the ravaging of the systemic crisis has become chronic.  When we can no longer afford to mistake expansion for development. When the choice is either death or change. And when you know the latter won’t happen until you break open the shell, puncture the membrane and scrap the fiction of reality. Right there, we meet the broken and disillusioned human with empty hands. Sent back to square one and free to re-invent the beginning.

POST NO BILLS enters into the series of X-act-produced solos, which focus on various aspects of the human existence. It explores crisis as a creative transformer. And sets off from the Existential Psychology stance that crisis must lead to criticism and not merely be suffered passively.

In 2015 Kitt Johnson has received REUMERT award as a Dancer of the year for her performance POST NO BILLS. Here’s the motivation: “Powerful, scary, and fascinating. With charismatic presence and sharpness of movement her small body filled up the naked space. She crawled off like a dying insect – dressed as a terrorist before the last mission.”.

In the same year she was also awarded one of the prestigious prizes by the Danish Arts Foundation for POST NO BILLS with the following motivation: “Kitt Johnson is unique in the field of Danish performing arts. She has once again mesmerized her audience with her outstanding bodily skills. With this performance she refines her minimal physical expression even further into an existential art of transformation that is rightly in demand internationally. Kitt Johnson continues to demonstrate an inspiring consistency and stringency in her works.”

Kitt Johnson X-act is one of the longest existing, most productive dance companies in Denmark. Founded in 1992, the company has evolved into a dynamic cultural enterprise, staging its own productions, producing and curating site-specific performance festivals, touring intensively at home and abroad, and offering physical classes, workshops, lectures and arts consultancy services. The company’s repertoire represents a wide spectrum of solo performances, ensemble works, New Circus, site-specific projects and a children’s performance.